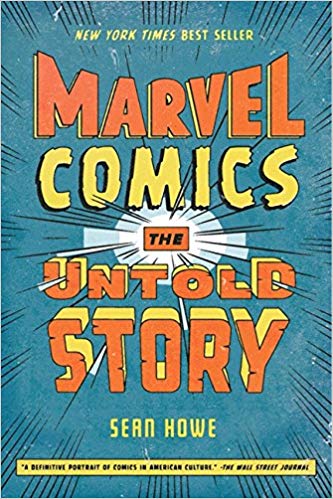 The Bagels and Biographies Book Club will be showcasing the best in biography, memoir, true crime, and non-fiction every month. Each last Monday morning of the month, we'll get together for a rollicking good time, discussing books and eating bagels for brunch. Contact the Adult Services Department for more information. Pick up your copy of the book at the main desk on the first floor.


August's book is Marvel Comics: The Untold Story, by Sean Howe. In the early 1960s, a struggling company called Marvel Comics presented a cast of brightly costumed characters distinguished by smart banter and compellingly human flaws: Spider-Man, the Fantastic Four, the Avengers, the X-Men. Over the course of half a century, Marvel's epic universe would become the most elaborate fictional narrative in history and serve as a modern American mythology for millions of readers.

For the first time, Marvel Comics reveals the outsized personalities behind the scenes, including Martin Goodman, Stan Lee, Jack Kirby, and generations of editors, artists, and writers who struggled with commercial mandates, a fickle audience, and—over matters of credit and control—one another. Marvel Comics is a story of fertile imaginations, lifelong friendships, action-packed fistfights, and third-act betrayals—a narrative of one of the most extraordinary, beloved, and beleaguered pop-cultural entities in America's history.